In a review of the charts of 158 patients who had undergone breast reconstruction with free transverse rectus abdominis musculocutaneous (TRAM) or deepinferior epigastric perforator (DIEP) flaps and who were treated for postoperative pain with morphine administered by a patient-controlled analgesia pump, the total dose of morphine administered during hospitalization for the flap transfer was measured.

Patients whose treatment was supplemented by other intravenous narcotics were excluded from the study. The mean amount of morphine per kilogram required by patients who had reconstruction with DIEP flaps (0.74 mg/kg, n = 26) was found to be significantly less than the amount required by patients who had reconstruction with TRAM flaps (1.65 fig/kg; n = 132; p < 0.001). DIEP flap patients also remained in the hospital less time (mean, 4.73 days) than did free TRAM flap patients (mean, 5.21 days; p = 0.026), but the difference was less than one full hospital day. It was concluded that the use of the DIEP flap does reduce the patient requirement for postoperative pain medication and therefore presumably reduces postoperative pain. It may also slightly shorten hospital stay. (Plast. Reconstr. Surg.107: 338, 2001.)

The deep inferior epigastric perforator (DIEP) flap is a relatively new modification of the free transverse rectus abdominis musculocutaneous (TRAM) flap in which branches of the deep inferior epigastric artery and vein are dissected out of the rectus abdominis muscle so that only blood vessels, and no muscle, are harvested with the flap (Figs. 1 and 2) . In this way, donor-site morbidity is minimized and postoperative pain is reduced. Patients recover from the surgery more quickly and seem to require less pain medication. 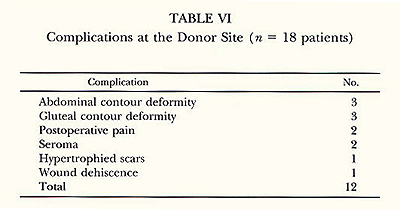 We decided to test the hypothesis that the DIEP flap causes less postoperative pain than the standard free TRAM flap by measuring the amount of narcotic medication used by each patient and comparing the amounts used by patients who had reconstructions with different types of flaps. We also wanted to see whether there was a difference in the length of hospital stay and whether or not any difference was either statistically or clinically significant.

Patients and MethodsAll patients who underwent breast reconstruction at The University of Texas M. D. Anderson Cancer Center with free TRAM or DIEP flaps between March 1, 1996, and March 31, 2000, and who were treated for postoperative pain with morphine administered by a patient-controlled pump were eligible for the study. Virtually all patients who undergo breast reconstruction in our institution are treated with narcotics, using a patient-controlled pump. Morphine is usually the narcotic of choice, but some patients do not tolerate morphine well and are therefore given alternative drugs. Patients who had received intravenous drugs other than morphine (such as Dilaudid or meperidine) were excluded from this study, even if they had also received morphine. Flap choice was determined by surgeon preference. Because patient assignment to a surgeon was determined by a scheduling nurse and was usually random, the choice of flap technique in most cases was random as well. Patient charts were selected at random for review, except that all eligible DIEP flaps performed during the study period were included. The study was concluded when enough patients had been accrued to allow valid comparisons between the DIEP and free TRAM flap groups.

The mean dose of morphine (both in mg of morphine and in mg/kg) was calculated for each group and comparisons made using the test with independent samples. A two-way factorial analysis was also performed using flap type and bilateral reconstruction to see whether laterality affected the results. No other correction was made for multiple testing. Differences with p values less than 0.05 were considered to be statistically significant.

Table I Mean Postoperative Morphine Patient-Controlled Pump Use and Hospitalization after Breast Reconstruction, by Type of Flap Used: All Patients

This report supports the efficacy of the DIEP flap in reducing abdominal donor-site morbidity. It should not imply, however, that all other types of TRAM flaps are obsolete or inferior to the DIEP flap. The DIEP flap causes less donor-site morbidity, but it also is supplied by fewer perforators and therefore has less blood supply than the usual free TRAM flap. For some patients, the DIEP flap may well be the method of choice. For others, those who require a more robust flap blood supply, other flaps may be preferred. This subject, however, is beyond the scope of this article and will be covered in a separate report.

In conclusion, our data suggest that the DIEP flap does in fact cause less postoperative pain than other types of TRAM flaps. As such, it has real advantages and deserves serious consideration by surgeons who perform postmastectomy breast reconstruction with autologous tissues.